Discovering Sicily and the Scent of Marsala

The warmth of the sun that shines an orange hue in the deep blue sky, views to the rich vineyards that produce some of the island’s most well-known wines, the intense perfume of orange blossoms and citrus fruits from the dense groves which spring up along the roads and the sweet scent of Marsala from the stone walls of ancient wineries – these are just a few of the unforgettable images of an island veiled in history and steeped in culinary culture.

Surrounded by the deep blue of the Mediterranean Sea, Sicily is the largest of the Italian islands. Basking in a warm climate year round its land changes abruptly from lush hills covered with brush and unending rows of grapevines to stark, arid terrain brown from the beating sun. The island is known as the Trinacria – the region’s symbol present on its flag depicting the head of Medusa with three legs and three stalks of wheat. Like the island it represents, the Trinacria is in the form of a triangle. The northwestern part of Sicily is a paradise for those who adore breathtaking views of the sea and love to explore history. In fact, the hills and seasides of this area have been, through the centuries, dominated by the Phoenicians, Greeks, Romans, Byzantines, Arabs and Spanish, each civilization leaving traces of their culture, architecture and food throughout the towns and cities of the island.

A short trip to this part of Sicily is a unique experience, and a must stop is the city of Trapani found on the northwestern coast, its port resting just below the medieval town of Erice. The heart of the city is baroque and its elegant streets built by the Spanish intertwine around historic buildings which once belonged to the city’s nobility, as for example Palazzo Senatorio, also known as Palazzo Cavarretta (via Torre Arso) which today houses Trapani’s city hall. Across the street are four ancient towers: Torre di Porta Oscura (called Torre dell’Orologio), Torre Vecchia, Torre del Castello di Terra and Torre Pali. Together they once formed a fort used by the Carthaginians as a lookout to protect against attacking ships. Two other architectural jewels found in the historic city center are the churches of the Santuario dell’Annunziata (via Conte Agostino Pepoli) and Sant’Agostino, a church which dates back to the fourteenth century. A visit to Trapani should also include a stop at the museum Museo Pepoli where tourists can admire one of the city’s traditions of creating objects made from coral. The museum houses a rich collection of brightly colored jewelry and objects.

Before leaving the city, take a quick stop at Fontane del Tritone in Piazza Vittorio Emanuele, and then stroll down the small street which connects Corso Vittorio Emanuele and Viale Regina Elena. Here hungry visitors will find the restaurant Serisso 47. Owned by chef Gaetano Basiricò this is the ideal spot to try Trapani’s Arabic influenced cuisine. For a traditional meal that will leave the taste buds humming try the Cous Cous di Pesce – a typical dish made with semolina cous cous which is steamed and placed on a fish broth accompanied by the fresh catch of the day. 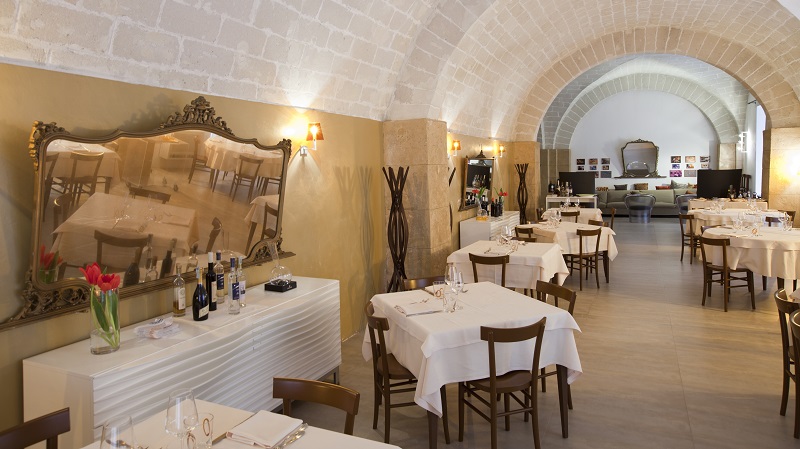 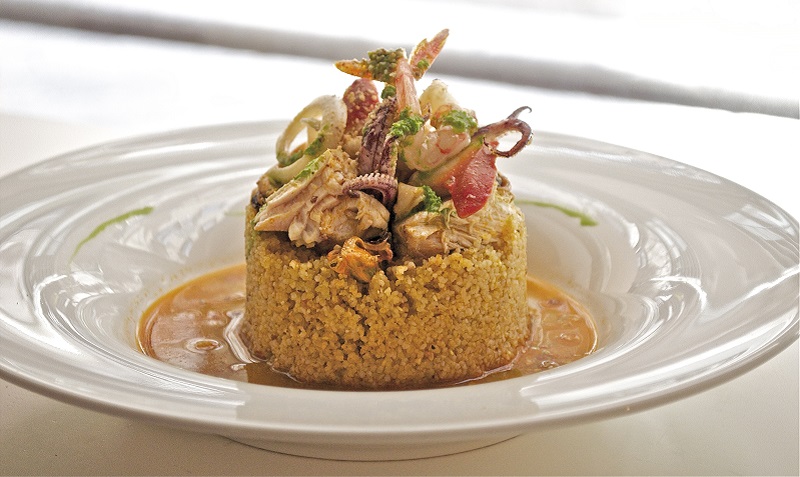 Leaving the city of Trapani and traveling southwards on the panoramic highway SS115, which passes by the moon like landscapes of the nature salt preserve Riserva della Salina, travelers soon reach the town of Paceco and one of the stops along the area’s wine route known as Strada del Vino delle Terre Sicane. Here, on the hills facing towards the sea and the shadows of the distant Egadi Islands, are the 110 hectares of the estate Baglio Soria delle Cantine Firriato. Owned by the Di Gaetano family, the land on these hills is particularly rich with minerals which create wine varietals with incredible structure. These grapes are used to produce excellent wines such as Camelot – a red IGT wine (a geographically classified Italian wine) made from a blend of Cabernet Sauvignon and Merlot – and a white, Santagostino Bianco, which is a captivatingly fresh and fruity blend of Chardonnay and the indigenous varietal Catarratto. 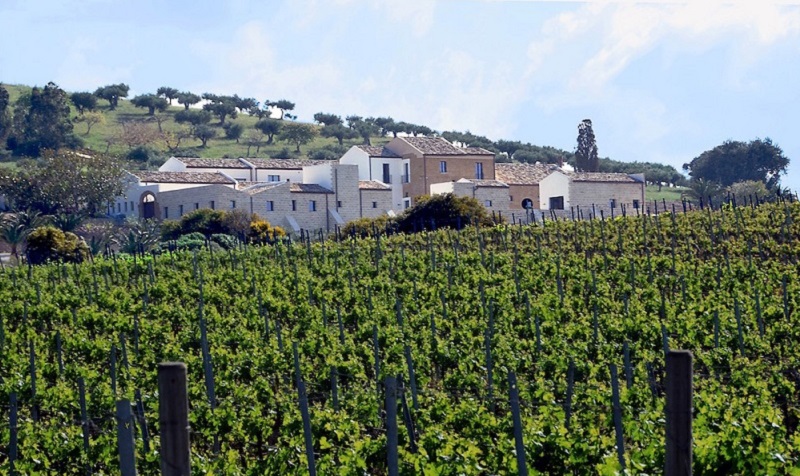 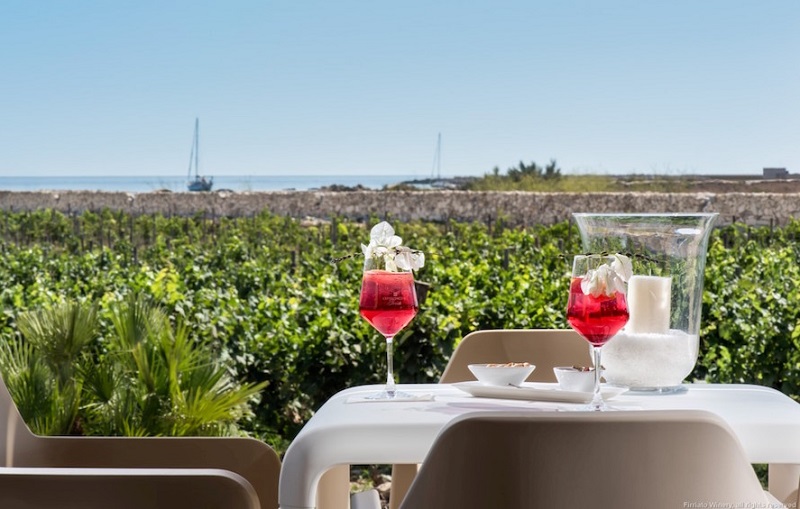 Driving south along the coast, the beautiful views continue to enchant. Looking out towards the sea, travelers can see straight to Favignana, a paradise for those who love scuba diving, and further on to Isola Grande part of the Isole dello Stagnone, the largest lagoon in Sicily. The road winds on to the city of Marsala, a city best known for the famous liquor produced here. It was named the European Wine Capital in 2013 and was again honored in 2015 when the fashion industry officially named a color after it – color marsala, a nuance which was designated color of the year by the US company Pantone Inc. 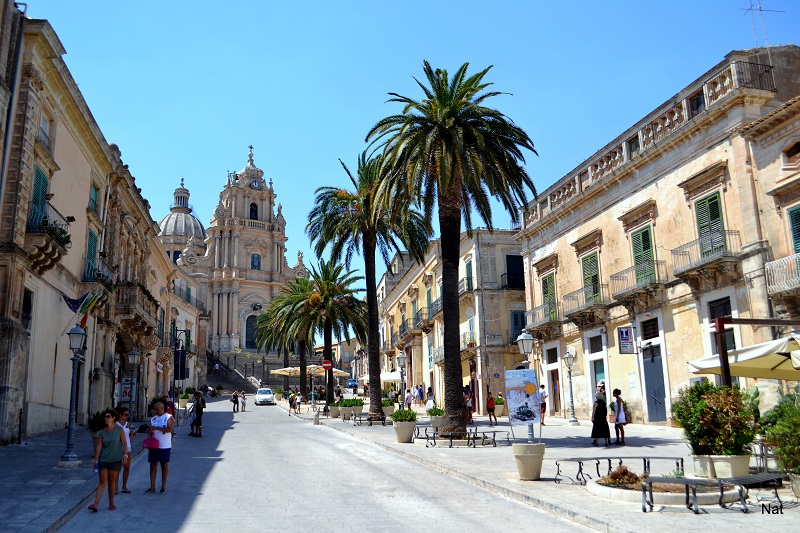 Wine lovers shouldn’t miss the chance to visit one of the local wineries while visiting Marsala, and a stop at Florio Concept Winery is a must for an exceptional experience at a winery that mixes design and architecture with the heady scent of marsala. Built in 1832 by Vincenzo Florio, the structure made of tuff reflects a typical English style that was popular at that time, with large pointed arches and a floor made with the ground powder of the tuff stone. The winery’s various products – passito, marsala, spumanti – are an ode to the history of Sicily. Florio Concept Winery produces excellent wines typical of this region. Beginning locally with the city of Marsala itself, Florio uses a specific grape called Grillo, grown in the vicinity, to produce its exceptional Marsala and offers various rare reserves dating back several decades. Instead, Florio grows its Zibibbo grapes under the scorching sun on the island of Pantelleria to create their sweet wines Morsi di Luce and Pasito di Pantelleria. More vineyards located around Trapani and on the Eolian Islands off of Sicily’s northeastern shore are ideal for making a sweet wine with an intense perfume known as Grecale. The fiery sun which bathes the island year round is one of Florio’s greatest allies and this is especially true of their Malvasia di Lipari, a liquor typical of the island of Lipari where the Malvasia grapes are laid out on straw mats known as incannucciati. For visitors who come to the area during the summer months, the winery offers a series of exclusive tastings guided by Florio’s wine experts. 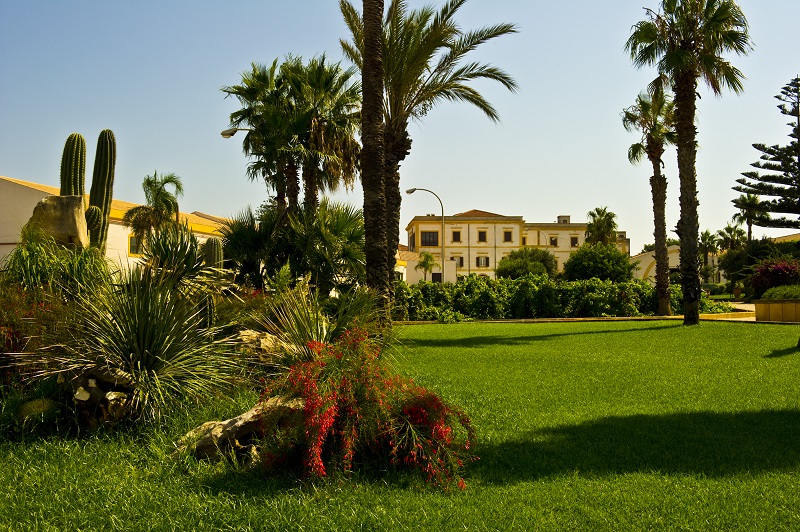 Marsala is also home to another of the island’s most important wineries, Donnafugata. Here, the grapes of the family’s vineyards, Contessa Entellina and Pantelleria, are brought after harvesting to produce the finest of wines which are then aged and bottled on the premises. A visit to this well-known winery is advised as is a look at their cellar, barricaia, which keeps a constant humidity level which ranges between 80%-85% and holds a steady temperature of 15-16°. This special cellar is the ideal place for aging some of their most precious wines like Chiarandà, Angheli, Tancredi and Mille e una notte. 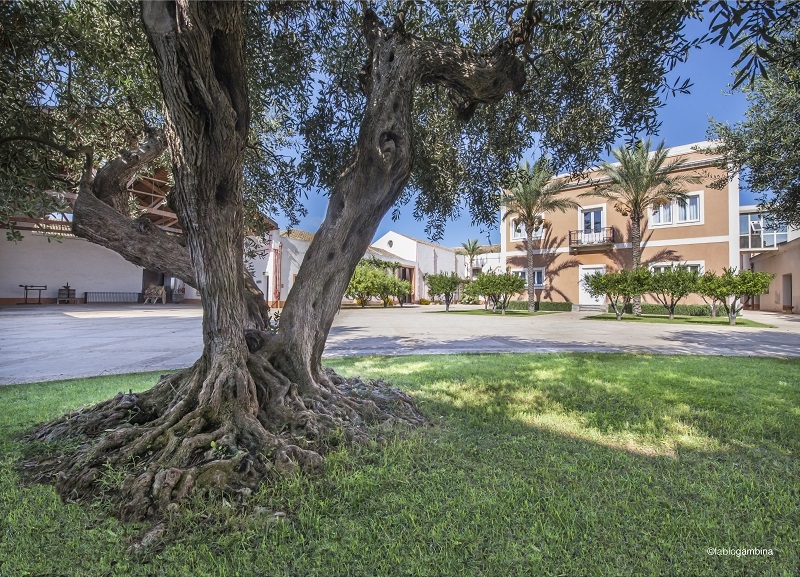 While in Marsala, consider a quick lunch at Ciacco Putia Gourmet (via S. Cammareri Scurti, 3) in the heart of the historic center, a characteristic shop which is also a delicatessen, wine shop and restaurant. Here clients can feast on the best of traditional flavors mixed with modern touches and cooking techniques. This home style restaurant is run by its two young owners, Anna and Francesco, who work tirelessly to provide their clients with top quality dishes and bites. The menu is dedicated to the island of Sicily with options including: pasta with sardines, macco with fave beans and fried pasta. All foods are prepared with regionally produced ingredients such as salt from Trapani and a particular tomato known as the siccagno. 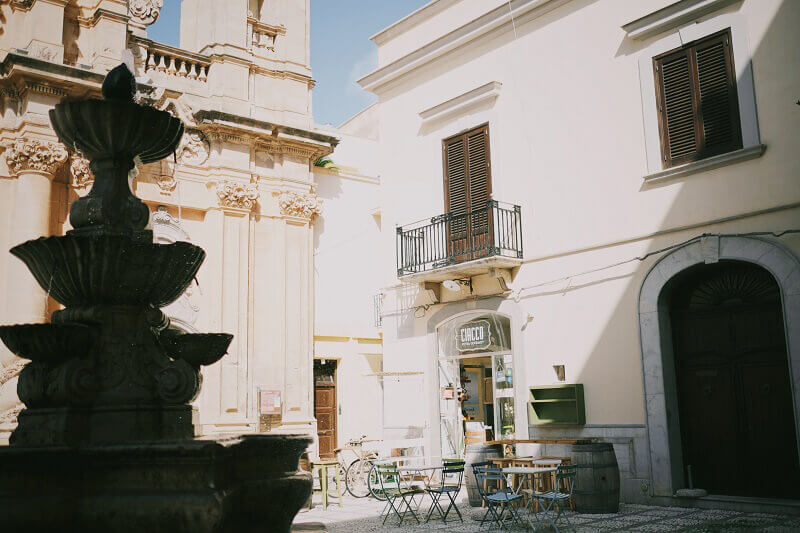 Instead for a lunch seaside with cool marine breezes, stop at the I Bucanieri, where diners can enjoy fresh fish or grilled meats while sitting under the restaurant’s vaulted stone ceilings. Try the Straccetti di tono al marsala (tuna with marsala), fresh pasta with yellow tail and almonds, traditional beef involtini or the Angus filet. The menu also tempts diners with many of Sicily’s favorite desserts including cannoli prepared fresh when ordered, Sicilian cassatina and a parfait of almonds and pistachio.

One last stop before leaving Marsala should be a stop at the Museo degli arazzi fiamminghi (via Giuseppe Garaffa). Founded by the archbishop Andrea Linares in 1984, the museum houses eight tapestries dating back to the 16th century. These amazing pieces of history depict the conquest of Jerusalem (66-68 A.D.) by the generals of the Roman army Vespasiano and Tito.

A short drive further south and travelers reach Selinunte. Facing westward, the beaches are the ideal point for watching the spectacular fiery sunset at the Zabbara, a location with a sixties vibe and breathtaking views over the acropolis, left in its Doric style by the Greeks who ruled the area from the 5th-3rd centuries B.C.

With the last of the evening rays, dinner is served at Porto Palo di Menfi. Chef and owner Vittorio invites his guests to try one of the house specialties, pasta with sea urchins freshly caught off the island’s coasts. Follow up the pasta with the Grigliata mediterranea, a grilled mix of the local day’s catch and a glass of a cool aromatic white wine such as Lighea from Donnafugata. 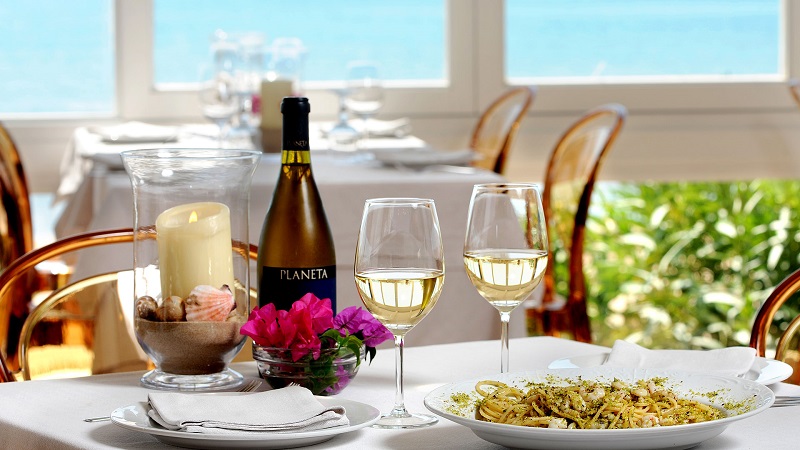 As night settles in and cools the warm evening air, it’s time to relax at Foresteria della Cantina Planeta, an exclusive resort nestled among the vineyards and surrounded by green grass. Here, the rooms are all decorated in typical Mediterranean style with geometrically patterned carpets and Burgio and Caltagirone ceramics. The perfect place to lean back after all of the day’s culture and travel. 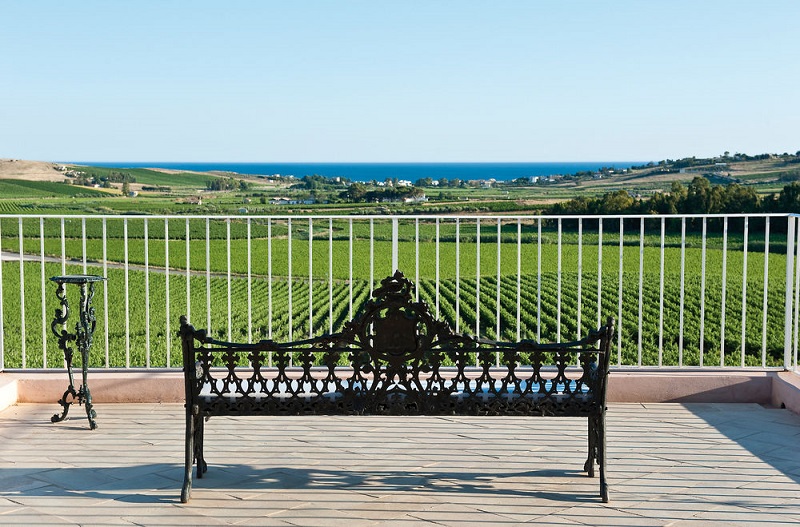 Sicily may well be the most beautiful of the Italian islands – a land that is lively and wild, sprinkled with some of the country’s greatest romantic beauty and brightly hued sunsets that capture it all as if in the frame of a master painting. It’s a land rich in history and tradition, where a love for this unique place helps to create some of the best products to be found. A weekend spent traveling along its wine routes offers a surprise around every curve as sea meets land and locals welcome all those wishing to get acquainted with their culture, food and wines. It truly is a trip to delight the senses with all of its vivid perfumes and colors, which peak with the noon sun and slowly taper off as the orange sun dips below the horizon caressing the vineyards as it slowly lowers to meet the ever-blue sea.

Discovering Sicily and the Scent of Marsala

A Chef Amongst the Stars: William Anzidei of Les Étoiles in Rome

Corner 58 by Roberto Conti in Milan