Moka Pulcina: a sculpture of technology by Illy and Alessi

Today Italians, die hard coffee lovers for generations, carefully watch the ever-changing landscape of gastronomic offers becoming increasingly aware of the quality and research fundamental to calling any item Made in Italy. 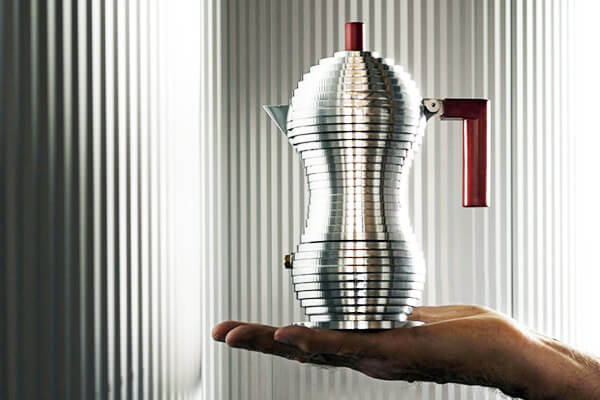 Recently, producers of capsule coffee machines have heavily invested in producing coffee makers that purr with attractive forms and in creating Oscar worthy advertisements.  Yet in Italy a massive 20 million families have no intention of giving up their classic moca and the rituals of preparing a true Italian cup of coffee.  Italians, lovers of design and innovation, simply will not give up such a clear expression of their national identity so deeply etched into their daily lives.

Pulcina was designed with these 20 million traditional Italians in mind.  This revolutionary espresso maker is the result of a creative collaboration between two leading companies which understand excellence and form – Illy, historical leader in the production of the coffee bean based in Trieste, and Alessi, top leader in design accessories.  In fact, it was Alfonso Bialetti, grandfather of Alberto Alessi, the current president of Alessi Spa, who, in his office in 1933, invented the Crusinallo Moka Express – the first moka that revolutionized the simple pleasure of preparing a coffee.

Not surprisingly, Illy and Alessi chose the stylish and innovative city of Milan as the backdrop for the presentation of Pulcina to the media.  This gem of a coffee maker unites Illy’s thermofluidynamic technology with Alessi’s design experience.  The special conformation of the boiler prevents what is so aptly called in the world of Italian coffee ‘the Stromboli Effect’ or the seepage of foam from the coffee.  Many mistakenly take the foam as a sign of a high quality coffee yet this isn’t so.  It actually compromises the organoleptic quality of the coffee producing a bitter aftertaste often found in coffee made with classic moka makers.

To this innovation was added the creative genius of designer Michele De Lucchi who chose aluminum, an optimal heat conductor, for Pulcina. In Italian a pulcino is a baby chick and a close look at the spout, straight and pointed, renders the exact idea of a chick’s little beak.  The final touch is the form of the handles which are available in either red or black.

This modern and revolutionary espresso maker is an ambitious project which was first begun 15 years ago with the “Moka del 2000” and continually perfected until reaching the Pulcina.

“Producing the best coffee for one and the most beautiful espresso maker for the other.  They are the histories of two families for Illy and Alessi.  I think that I can affirm that this espresso maker represents a benchmark in the quest to optimize form in order to improve the organoleptic properties of coffee prepared with a moca,” stated Alberto Alessi, President of Alessi Spa. 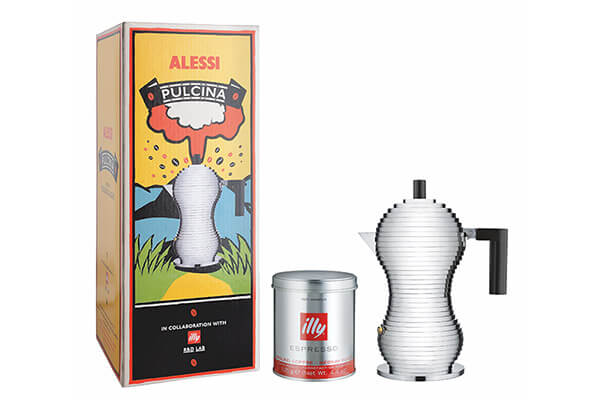 A journey through Italian excellence which at the same time becomes synonymous with quality, innovation and creativity, explains Andrea Illy, President and Managing Director of Illycaffè.

“This moka is a complete expression of the passion for excellence that has always distinguished Alessi and Illy and contributed to spreading the preparation of the espresso, an authentic symbol of Italian lifestyle in the world.”

Pulcina is something for Italy to boast about and is the result of a large investment (about 100 thousand Euros).  The final product is once again one which differentiates itself for its ability to excite the palate with the true flavors of coffee while hitting all the marks of a refined and functional object ready to be put on display in kitchens throughout the world.

Pulcina is available for preview at the Illy shop at the Coffee Cluster at the Milan Expo 2015.

Moka Pulcina: a sculpture of technology by Illy and Alessi