No, the fagiolo tondino del purgatorio, which literally translates into the round pergatory bean, isn’t a quote from Dante or a food prepared in the bible. Historically they were prepared on Ash Wednesday when people prayed for the souls still believed to be in pergatory.  The beans are grown in the area of Viterbo in a small zone called Gradoli. Why are these beans chosen and not others? Because these small beans (the smallest of them) have a very soft rind and therefore do not need to be pre-soaked or cooked for a long time. In 30 minutes they are ready, something almost impossible for other types of dried beans.
The traditional recipe used for Ash Wednesday calls for the legumes to be boiled in water along with garlic, sage, a bay leaf and salt and then mixed with extra virgin olive oil, salt and pepper.

Also known as the “Pearls of Tuscia” they are a typical product of Lazio and are unique because they are cultivated in the volcanic soil found near Lake Bolsena – a pristine area, where the ground is  rich in potassium and far from industrial plants.

The use of the blast is very common, particularly in restaurants that serve raw fish. It is in fact obligatory for health reasons.  The fish is placed in a temperature of – 20 ° C for 12 hours or – 30 ° for 6 hours – or at – 18 ° for 48 hours if using the traditional freezer. This process alters, although minimally, the taste and the organoleptic properties of the food, less when using a professional blast because the freezing time is shorter and as a result the ice crystals are smaller and tear the food less. This technique ensures the elimination of any parasites present in the fish, such as Anisakis simplex, a nematode which is extremely dangerous and is transmitted from fresh fish. The presence of this parasite is greater in oily fish, but has now spread to almost all fish species.

Clarified butter is obtained by removing water and milk proteins, which are bound together by means of Casein – a protein contained mainly in butter, thereby leaving the purified fatty part of the butter. This process is essential for raising the smoking point of the butter, which in its normal state burns at a temperature between 120 ° and 160. ° Once purified, the smoking point raises to 252 degrees, allowing the butter to be used in frying (either alone or combined with oil) and it can be used at hot temperatures for a longer period of time. Clarified butter has a fat content of 99% all of which is unsaturated. It is an indispensable ingredient in sauces such as Bernese and Hollandaise.  When used in place of regular butter the lower water and protein content need to be taken into consideration when measuring.  Preparing clarified butter at home is not particularly difficult.  You simply melt whole butter in a double boiler, without mixing so as not to disturb the white layer that will settle to the bottom of the pan. Use a mesh strainer to eliminate the dense foam which forms at the top.  Boil for another 20 minutes and you will see the protein settle at the bottom.  Slowly pour the liquid part into a container and place to cool in the refrigerator or leave out at room temperature until it solidifies again. You can find the product ready for use in shops, and in particular at ethnic shops where Ghi, an Indian type of clarified butter, is sold.  Clarified butter is widely  used in Middle Eastern cooking.

A main course with various flavors and textures. The creaminess of the filling made with beans and potatoes, wrapped in a thin sheet of pasta, contrasts the shrimp , with its  firmly and compact texture, used, together with chives, for decoration. 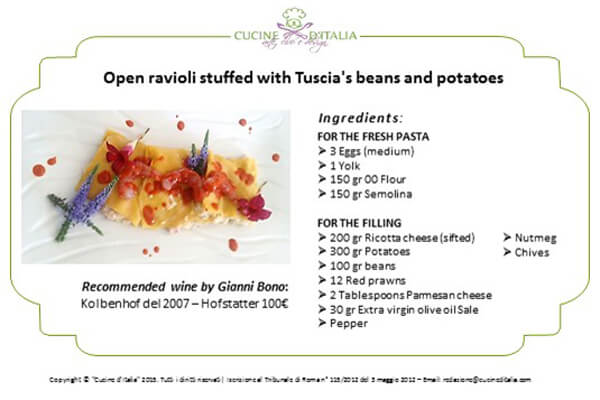 For the fresh pasta:
Take a bowl, break three eggs and beat. Pour one cup of hot water and add the flour little by little. Stir the mixture with a fork first, and then with your hands for 10 minutes until the mixture is smooth and homogeneous. Cover dough with plastic wrap and let rest in refrigerator for at least one hour.

Preparing the filling:
Soak the beans over night. Cook in unsalted cold water and continue to simmer for 90 minutes after they begin to boil. When finished cooking, purè the beans with the help of the blender until the mixture is creamy. Set aside.

Boil the potatoes in unsalted cold water with their skins on. Once cooked, pass them three times through a masher being sure to eliminate any trace of lumps. Add the ricotta cheese, Parmesan cheese and the cream of beans. Add a pinch of salt, pepper and a sprinkle of nutmeg.

Preparing the raviolo:
After the “resting time” for the dough, take it and divide into four equal pieces and pass each loaf through the pasta machine four times until they are stretched to a thin sheet about 2 mm thick. Cut into strips of about 50 cm in length obtaining squares of about 10 cm x 10 cm.

Place the filling inside each square with the help of a spoon or a sac-à-poche. When closing the ravioli, the filling must be kept in the middle, use a light pressure with your fingers to let out the remaining air inside. Seal well with the tip of a fork or the appropriate pasta wheel, taking great care not to pierce the dough.

Boil a generous amount of salted water. Cook the ravioli for no more than 30 seconds, drain and toss quickly in the pan with melted butter (clarified in a water bath).

Put three ravioli cut in half on the dish, garnish with chives and a few uncooked shrimp tails.

Performance cookies are used to understand and analyze the key performance indexes of the website which helps in delivering a better user experience for the visitors.

Analytical cookies are used to understand how visitors interact with the website. These cookies help provide information on metrics the number of visitors, bounce rate, traffic source, etc.

Advertisement cookies are used to provide visitors with relevant ads and marketing campaigns. These cookies track visitors across websites and collect information to provide customized ads.

Other uncategorized cookies are those that are being analyzed and have not been classified into a category as yet.