An egg in Purgatory

An Egg in Purgatory takes an ordinary kitchen staple, the egg, and dresses it up with the unexpected flavors of melted pecorino cheese, pureed red bell peppers and then ties it all up with a touch of licorice.

The dish was originally presented at the cooking show at Villa Santa Maria and is a recipe that honors some of the most unique flavors of Italy’s Abruzzo region. It calls for the use of a particular egg laid by a black hen which is found exclusively in the Abruzzo area of Italy and actually risked extinction for a brief period and serves it with an unusual pecorino called Pecorino di Farindola.  This cheese is different from most others because it is made with a mix of both cow’s and sheep’s milk.  It is carefully handmade in small quantities in the eastern part of the region of Abruzzo.

Simply biting into this small dish is like taking a brief trip through this rustic and historic region of Italy.  The first taste to hit your mouth is the sweetness of the red peppers quickly followed by the sharpness of the pecorino and then the softness of the egg and a pop of licorice.

The dish was named after Dante’s VI ring of purgatory where gluttons were made to suffer for their exaggerated love of food tormented by continual hunger ad thirst.  The white of the egg in the middle of the red cream brings to mind the souls in purgatory tormented by the red hot flames. 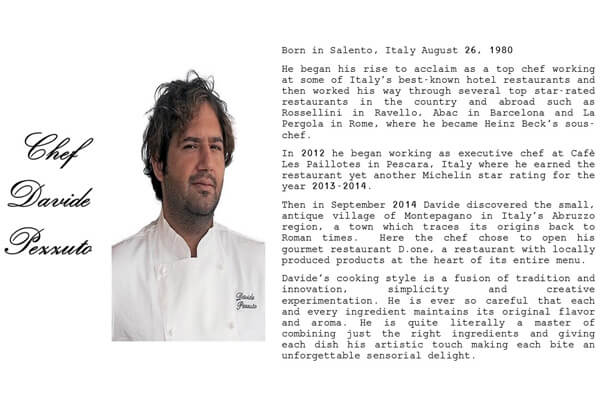 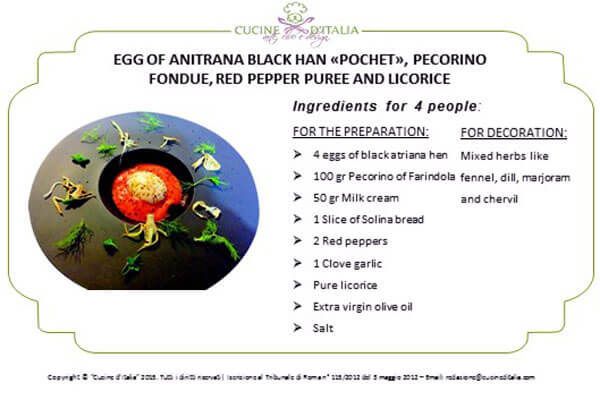 Peel the raw peppers and cut them into thin slices.  Saute the peppers in a pan along with a clove of garlic, a ladle of water, salt and black pepper.  Once the slices are cooked through pure them obtaining a velvety cream.

Cook the egg in either a steamer or in boiling water at a temperature of 62° for 38 minutes.

Melt the pecorino cheese in the warm heavy cream until a soft homogeneous mixture is formed.  Then remove from heat.

Cut the bread into cubes and toast.

Take a soup or pasta bowl and cover the bottom with the pecorino cream.  Place the cubes of toasted bread over the cream and add the pepperoni pure.  Shell the egg carefully and lay it on top. For the final touch grate the licorice over the egg and decorate the edge of the plate with the greens.

ITALIAN VERSION OF THE RECIPE

An egg in Purgatory