Imagine a place where nature is still pristine, where the enchanting lights of the aurora borealis dance in the sky all wrapped up in the glacial cold of winter which leaves way to the wide open beauty of spring and breathtaking landscapes of summer. Imagine this and find Finland, land to the north, firmly planted in the west while touching the east. Finland’s culinary traditions find their roots in the country’s uncontaminated lands and sea as well as in its rich history. In fact, Finland was under the dominion of Sweden until the early 1800s. Unique Finnish culinary traditions mix their array of flavors with international inspiration and the talent of its contemporary chefs to create striking flavors well worth exploring. 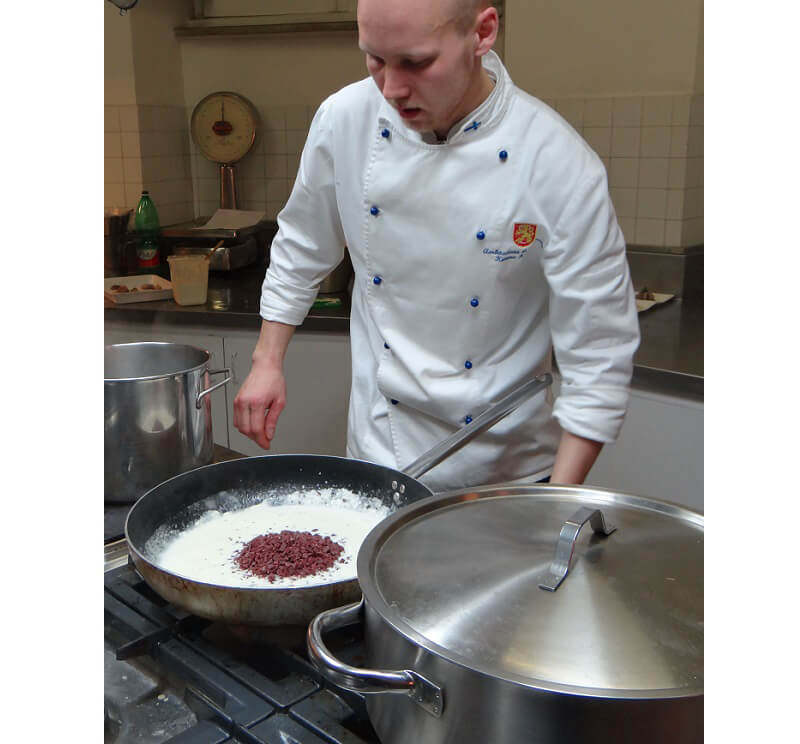 Cucine d’Italia offers up an excursion through the flavors of Finland presented by Chef Kimmo Kettunen, Executive Chef at the Embassy of Finland in Rome, at a cocktail party hosted by Janne Taalas, Finnish Ambassador to Italy.

A Plethora of Flavors

Fish plays an important role in the culinary culture of the country. In fact, both salt water and fresh water fish find their way into many local recipes. In Finland, there are numerous dishes prepared with salmon. One way to enjoy salmon is freshly caught and immediately grilled outdoors. As soon as the fish has been fileted, it’s placed on a wooden plank with pegs to hold the fish. The plank is then placed vertically at an angle close to the fire. This style of cooking is called ‘ristiinnaulittu lohi.’ The salmon can be paired with a glass of vodka which helps to bring out the smoky flavors from grilling.

On autumn nights as the weather grows crisper dinner parties are organized along the banks of rivers and lakes. Small, sweet fresh-water shrimp are often the main course as is rainbow trout, freshly caught and smoked. In summer, as the sunlit days of July draw to a close, crayfish dinners are an important part of Finnish culture and they continue on until the beginning of October.

Another highly prized food in Finland is mati, roe, frequently served with blinis prepared with buckwheat. Although various types of roe can be found, two popular types are muikku and siika, from the whitefish. Both are cleaned and lightly salted before being served with onions, black pepper and sour cream. Roe from perch, pike, salmon and the Baltic herring known as silakka are also easily available and quite common.

A multitude of delicious breads can be found in Finland. The long tradition of baking breads goes back centuries and can vary from one area to the next. Here they are most often made with four different types of grains: rye, oats, barley and wheat. In eastern parts of the country breads are at times filled with fish. One such bread is called kalakukko and it heralds from the province of Savo. Kalakukko is a bread stuffed with fish which is first wrapped in a layer of lard and then baked in an oven. Another traditional bread is karjalan piirakka, which is a flat rye bread filled with either rice boiled in milk, rice and carrots or with mashed potatoes.

Reindeer meat is a delicacy which comes from the northern area of Lapland where the animals are bred. Here the animals are left to roam and graze on the moss and lichens which cover the pastures. About 5,000 small farms breed the reindeer on these high northern fields. The breeding is carefully regulated by the Finnish government which specifies the exact number of animals to be used for breeding or for meat every year.

This attention to rigorously natural feeding and careful selection translates into a high quality and pure meat. Most of Finland’s production of reindeer meat is sold within the country itself, with only 2% destined for export. In fact, roughly 2.5 million kilos of reindeer meat is consumed annually in Finland between both restaurants and private consumers.

This northern delicacy is a meat different from most others. Immediately noticeable are its vibrant ruby color and its complete lack of fat. It’s tender and has a taste that is full and elegant, almost sweet, and not at all gamey. Aside from its gourmet standing, this meat also boasts a high protein content, lower fat content and is easily digestible. Its high levels of amino acids make it good for the metabolism and for athletes or anyone suffering from fatigue.

Finland is known for its cheeses and the Finns are great consumers of dairy products. A myriad of local cheeses present some of the most authentic flavors of the nation. One traditional dairy product is viili, a fermented milk with a fresh flavor quite similar to yogurt but milder and often served with berries. Instead, leipajuusto, or bread cheese, is a cheese which comes from Lapland with a pleasant flavor and slightly springy consistency. Originally it was prepared and cooked on a hot stone. Today it is made with milk curd which is heated in a pan and then served with one of the many types of ripe berries which grow abundantly around the country.

Besides its place as the star of many main dishes, reindeer meat is often served other ways as well and local chefs have been reinventing its use with new twists. It’s lean texture lends itself to making a perfect smoked meat and it’s also an ingredient in other dishes. Smoked reindeer mixes in with a creamy sauce for pasta or tops Finnish flat bread. It can be added to soups or served with eggs and was even used by Finnish pizza chain Kotipizza several years ago as a topping for a pizza infamously named in jest ‘the Berlusconi’ which ironically won the America’s Plate International award in 2008.

In Finland, seasonal ingredients are the basis for many delicious dishes. During the long days of the summer months Finland’s woods offer a plenitude of mushrooms and berries. Markets are filled with them, fresh and fragrant, just waiting to become part one of many delicious dishes. The earthy yet delicate aromas of freshly picked mushrooms pair well with meats and fish, and are perfect added to soups.

This land to the north boasts many varieties of wild berries such as lingonberries, cloudberries, strawberries, cranberries, raspberries, arctic brambleberries and the fruit of a particular type of moss known as the karpalo. Two of these are unique to Finland: the mesimaria, a red berry similar to a blackberry, and the lakka, an orange berry that only grows at these latitudes.

Many of these aromatic berries are gathered and used to make liqueurs, such as cloudberry liqueur, sweet syrups, magnificent jams, delicious desserts or are simply added to ice cream, puddings or yogurt. Alternatively, they may be lightly dusted with sugar or are served with a light cheese or even as garnish for meat dishes. 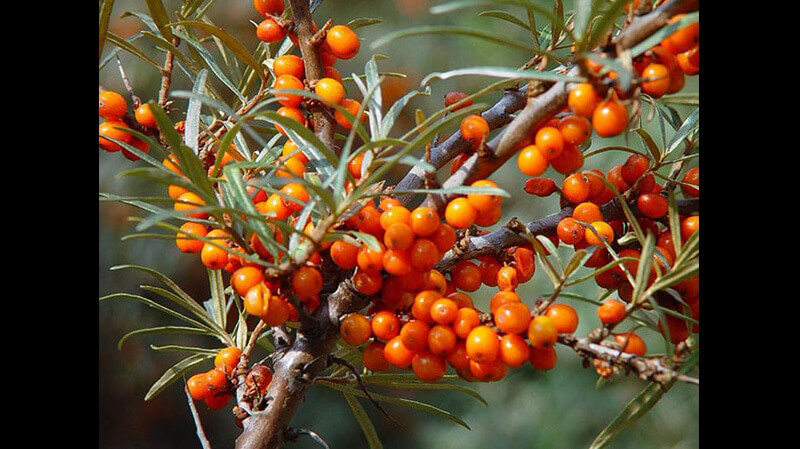 In Finland the sea buckthorn berries are most often found growing along the coastal regions of the Aland Islands or the Gulf of Bothnia. They are quite rich in vitamin C and have high levels of flavonoids. These berries have long been used in natural medicines and are to this day considered to be a great boost for the immune system and a natural preventative against colds. Their pulp, which is quite acidic and oily, is sometimes used for juices, jams, desserts and liquors.

However, they are also wonderful eaten just after picking when their vitamins are at their peak or otherwise squeezed for a fresh juice. If fresh sea buckthorn berries aren’t available, it is possible to buy their syrup which can be mixed with honey and stored in the refrigerator. Dried, they make for a good snack. 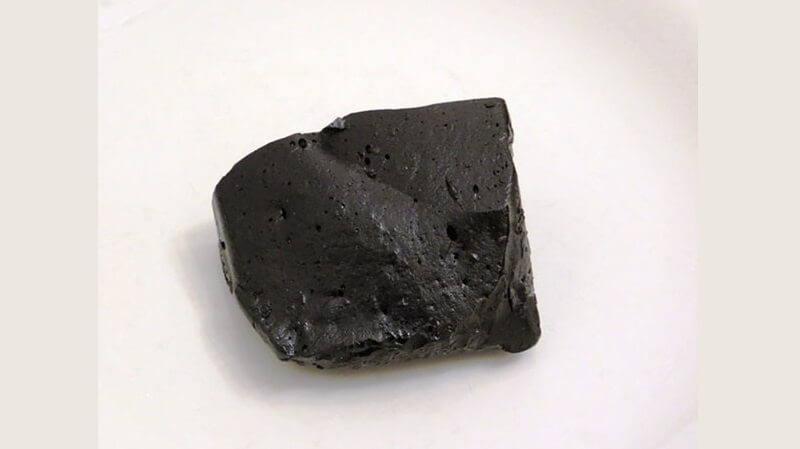 Liquorice is also quite popular in Finland. It is featured in several desserts and makes for a unique accompaniment to chocolate. Aside from being an ingredient in desserts it is also made into a salty liquorice called salmiakki – a candy with a sharp, sour flavor which many people enjoy and carry around with them. Its saltiness comes from the ammonium chloride which is added to the liquorice extract. Besides using it as candy, pieces of salmiakki can be melted in vodka to flavor the liquor. 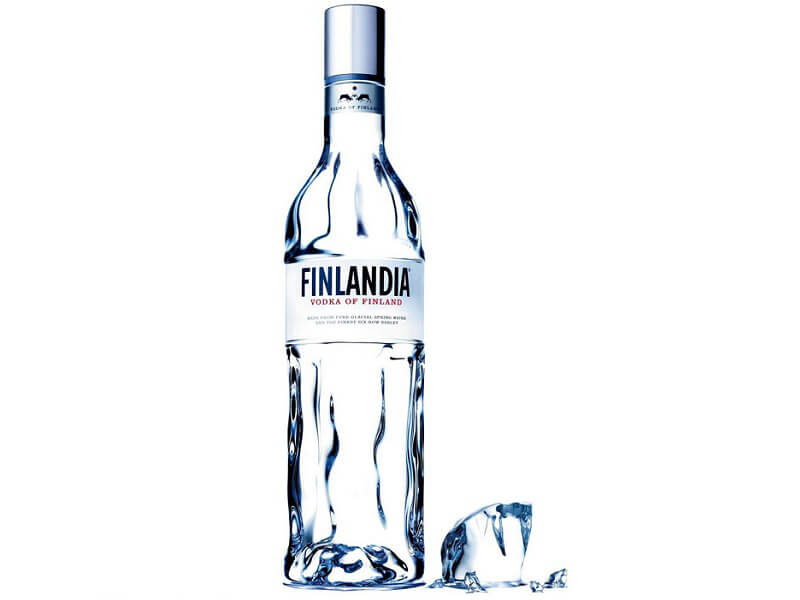 Finns are among the greatest consumers of kahvi, coffee, and maito, milk, in the world. Finnish coffee is traditionally a very light roasted coffee which is prepared with their naturally pure water to brew a coffee that is without defects. The country also has wonderful pastries to accompany the coffee.

Finland does not produce its own grape-based wines but rather other liqueurs made from fruits and berries. Finnish beer is top quality and can be found in three gradations: I without alcohol, III medium and IV/IVB strong. Class II beer was produced in the past but is no longer available, although there is some interest in bringing it back. One exceptional artisanal beer is sahti, a beer made with rye but without adding hops. Finland also produces excellent vodkas made from spirits obtained from the distilling of wheat, barley and rye.

Finnish cuisine, with its top quality domestic ingredients, is a shining example of exquisite traditional flavors and modern day creativity.

Italy’s Best Wine Events this May