Imperfection is Beauty and Bufalini Knows Why

Bufalini, the historic Tuscan company active in the research and processing of marble and stone, will participate in Milan’s Design Week from 6 to 12 June 2022 with its most recent synergy between design and material at the Circolo Filologico Milanese, in the heart of Milan, a few steps from Teatro alla Scala.

With its three hundred years of activity, Bufalini is part of the tradition of white Carrara marble, adapted according to a knowledge and know-how refined by time and the passion of four generations.

Bufalini’s workmanship sensitively captures the rich aesthetics of marble, thanks to diversified projects in various areas with the aim of transcending the architectural boundaries of construction to restore the innate beauty of this material.

For Milan Design Week, The Reading Room on the first floor of the Circolo Filologico Milanese will host the Drap collection of vases, bowls and trays in marble by designer Paolo Ulian. The name brings to mind a drape, as full-bodied as velvet or as ethereal as linen, with fringed ends that impose an unprecedented lightness on the solidity of marble. 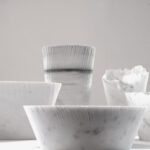 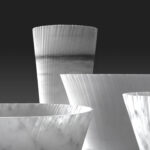 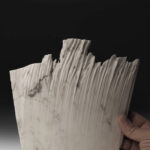 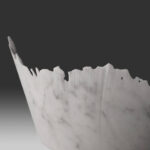 The elements are made with the Waterjet technique – a high-pressure water jet commonly used to obtain inlays and decorations from slabs of marble stone materials of small thickness.

Until recently, Bufalini’s production never explored the use of incorporating thicker marble, up to about 20 cm, on which to use the Waterjet to define concentric figures of different shapes. As the jet penetrates deeply, the profile of the vase emerges, which progressively loses its smooth finish and is characterised by a fringe-like effect, testifying to the material’s resistance to human intervention.

What would originally be a defect is deliberately amplified in the Drap vases, in a virtuous movement that enhances the technical limit of the machine and demonstrates how imperfection can sometimes be transformed into a defining source of beauty, becoming an important formal element. Each small block of marble is used to make five vases of different diameters, reducing material waste to a minimum compared to the usual processes, with a view to sustainable production.

Milan Design Week will become the showcase for Paolo Ulian to celebrate his long relationship with marble by focusing on the recovery of less noble varieties of the material, by reusing and optimizing in the production phase. His projects fully reflect this vision that brings out what is forgotten and makes it the protagonist of a new life and form.

Imperfection is Beauty and Bufalini Knows Why