From the hills of the Franciacorta arrives a certified vegan brut. Take a closer look at the characteristics of this cruelty free bubbly and the makings of Quadra’s Green Vegan.

As the number of people who choose to live vegan continually grows, so does demand for high quality foods which offer the guarantee of being free of any ingredient derived from animals. Therefore, it should come as little surprise that the pressure is also on for wine makers to do the same, and it is in response to this that Italy recently began offering the possibility for its wineries to obtain a vegan certificate from the Association of Italian Vegetarians.

Unless a person is familiar with the differences between what constitutes either a vegetarian or vegan wine, it can be a bit difficult to know exactly what is in the bottle. To begin with, a vegetarian wine must be free of any ingredient made or derived from the killing of animals. Hence, these wines are devoid of gelatin, isinglass or bone. Vegan wine further removes other ingredients derived from animals such as egg whites, casein or any milk product, all of which can be used in the production of vegetarian wines. In fact, many consumers are unaware of some of these other ingredients used to filter the wine and remove cloudiness.

The producers at the Quadra winery draw attention to the different methods used to produce a traditional Franciacorta and their vegan brut: “Quadra’s Brut Vegan is strictly made without the use of any animal based ingredient or product like egg whites, gelatin, casein or isinglass. This makes for a fine wine that is ideal for wine experts and for those who suffer from allergies to certain ingredients. Vegan by Quadra is a revolutionary concept in wine and labeling different from most wines on the market. For now Quadrs’s Vegan stands alone as the only vegan brut. The first reactions to this innovative Franciacorta have oscillated between those who see it as a new trend and others who view it as extreme. However, the reality is that there have been several important and complex reasons why Quadra has wanted to produce a vegan brut.” 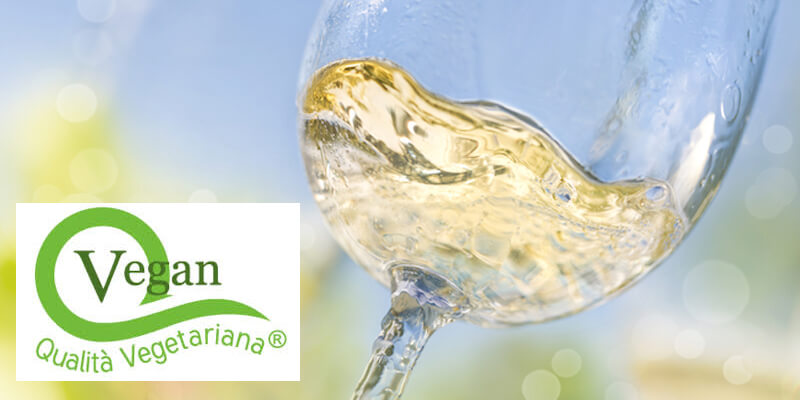 The regulations required to obtain recognition as a high quality vegan wine are quite strict, and Franciacorta Quadra has distinguished itself as the first winery to reach this certification for a brut produced with the classic method for making this type of bubbly. The winery’s director Mario Falcetti, a man who sees himself as an agronomist first and foremost and as an oenologist second, commented: “A trend? Absolutely not! What could be healthier than a wine made without any chemical or animal based additives?” After spending years dedicating his time to studying and researching wine making at the Istituto di San Michele in the Adige, Falcetti has managed to always follow his ideal of a return to the original art of wine making and a simplicity in caring for the vines using natural methods. All of the wines produced by Quadra are vegan wines since they are all made without using egg whites or any other chemical additive. Each product is truly natural and they all possess a unique taste and elegance as a result. To date, this Franciacorta has been the only wine presented for the vegan certification, however the producers are considering obtaining the same certification for their other wines as well. 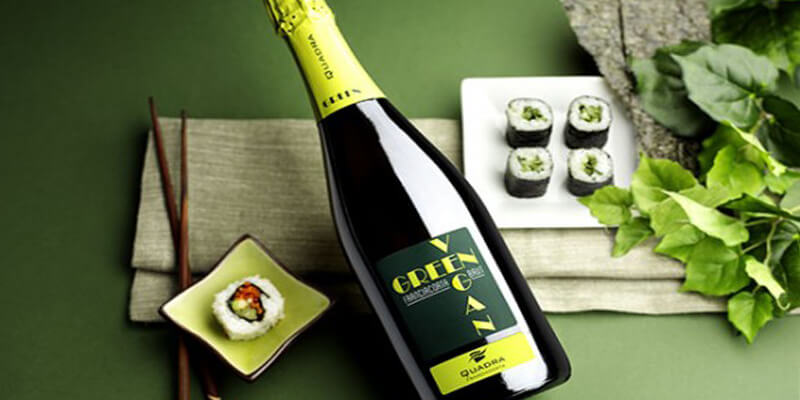 Quadra’s first Brut Green Vegan remains alone in its genre for the moment. It is a brut which is “not vintage and requires 54 months of aging in the bottle. It’s got a bright straw-like color with touches of light green and hints of fresh fruit like bitter orange or grapefruit with a bit of delicate spice. This brut leaves a light taste of citrus with a bit of acidity and its finish is both soft and austere without being sweet. Interestingly, there is no hint of yeast as a result of its long time spent aging in the bottle which completely breaks down all traces.”

The ideal serving temperature for Brut Green Vegan ranges between 4-6°C. It works perfectly with aperitifs, soups, vegan sushi, vegetables and most recipes which use tofu or seitan.
Top chef Leandro Luppi of the restaurant Vecchia Malcesine in Malcesine, Verona tells readers of Cucine d’Italia to try it with a risotto made with the essence of carrot, coffee, cardamom and macis – a recipe he created specifically to bring out the best of this new Franciacorta.

The Best Tuscan Wines for Summer