Tagliatelle with clams and truffles

Clams and truffles are two noble ingredients of Roman cuisine, as eternal as the city itself. Light and savory – the mere aroma of this spectacular pasta dish makes one want to take the first flight to Rome … or if that’s not possible, at least grab a fork and tuck right in. This is exactly the hope of Chef Bono, who hails from this city of cities and created this recipe to combine and highlight these two local ingredients in one unforgettable dish.

The truffles used to prepare the pasta are a particular variety named after the area they grow in, Monti della Tolfa, in the region of Lazio. The area is known for its pristine environment and vast diversity of plants and foliage. These truffles come in two varieties depending on the time of year when they are ready to be harvested. One type is the black variety which is picked in the winter. Another, called the Scorzone, is collected between May and October and is easily recognizable for its dark, bumpy texture and its unmistakable, delicate nutty smell.

Even the clams used in this dish are a type called Verace and are clammed in the Terranean Sea of Italy’s western coast.

However, if these particular ingredients aren’t available they can be substituted with your own local ingredients.

GET TO KNOW THE TRUFFLE

Truffles are a type of subterranean fungi – part of the gender Tuber Micheli first noted in 1729 and belong to the Tuberaceae family. The word truffle derives from the Latin word tuber, meaning outgrowth. These underground mushrooms are found in Europe, Africa, North America, and Asia. They usually grow in forested areas and are found at the base of certain trees such as the oak.

The two types of truffles most commonly used in cooking are black and white truffles. Black truffles or tuber Melanosporum, which originated in France, has a strong rich flavor. They are found growing under oak trees between the months of September and December. They are typically used in soups and are made into oil.

The tuber Magnatum is a white truffle that offers a more aromatic flavor and originated in Italy. They grow at the base of oak, hazel, poplar, and beech trees. The white truffle is harvested in the autumn and winter. Its lighter taste lends it to use in risottos and seafood. Just like the black truffle, the white truffle can also be made into a delicious oil.

The third variety of truffle, the gray kind, also exists.

The truffle has a long and somewhat mysterious history. For centuries it has captivated the attention and taste buds of some of the most notable nobles and has ended up on the tables of some of today’s finest restaurants. These jewels of the earth have over time been both praised as food with medicinal powers and even once prohibited as a food of evil.

The truffle appeared on the tables of the Egyptians where they were eaten cooked in fat and were used by both the Greeks and the Romans for therapeutic purposes as they were believed to impart eternal health to the body and soul. During the Middle Ages the church disapproved of the use of truffles, which, because of their exotic aroma, were believed to be an evil food used by witches. As a result, they disappeared from tables until they were rediscovered and made popular during the reign of Louis XIV. The French monarch was literally fascinated by the tuber and even tried, though unsuccessfully, to cultivate his own. From the Renaissance on the truffle once again grew in popularity reaching the height of production during the mid-1800s. However, its production dipped after World War I when many of the areas where truffles grew were destroyed during bombings. Today the truffle has returned in full force and remains one of the most prized and often expensive of foods.

The truffle springs up naturally at the foot of bushes and trees and can at times be a bit difficult to find. In Italy men used to use pigs to sniff them out, but often the pigs turned out to be gluttons for this savory delight and would eat the precious fruit before they could be collected. Nowadays, dogs are preferred to hunt for truffles and are specifically trained to do so. No particular race of dog is preferred and, in truth, many truffle seekers like using small mutts the best.. The dogs are able to sniff out the location of a truffle which is then carefully dug up by the owner.

Truffles are a prized and expensive food exported to countries around the world and can be found packaged or canned. The most important aspect in buying truffles is to check for the ripest as they will be the most delicious. They can be found at markets and specialty stores and can even be order online both domestically or internationally. 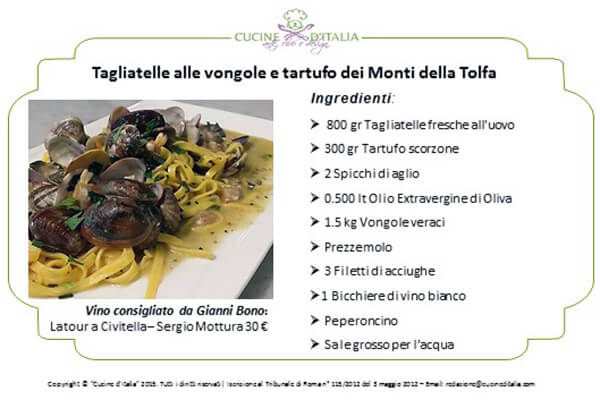 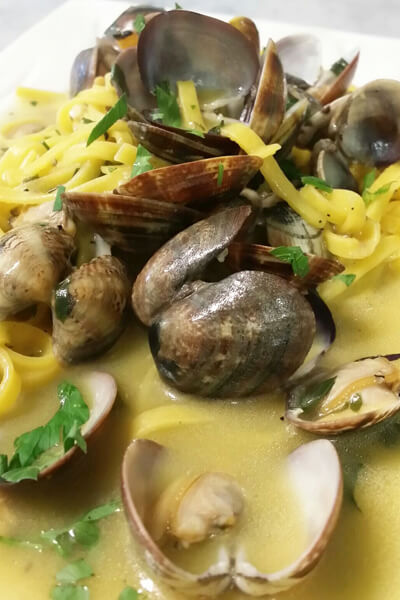 INGREDIENTS FOR TAGLIATELLE WITH CLAMS AND MONTI DELLA TOLFA TRUFFLES

Carefully clean the truffles paying particular attention to removing all traces of dirt. The easiest way to do this is to buy an inexpensive, soft bristle toothbrush and use this to brush the surface of the truffle being gentle so as not to break its surface. Then clean it quickly under cold running water and dry with a soft cotton cloth. Ideally, prepare the truffle one day in advance and leave it in a bowl surrounded by uncooked rice. This step will assure that the truffle is completely dry and ready to be cooked.

Chop the truffle and place it in the container of a handheld blender along with the olive oil and blend at high speed until creamy.

Place the garlic cloves, still in their skins, in a pan along with the anchovies and the truffle cream and heat the ingredients at 75° for five minutes stirring constantly. When cooked remove the garlic and place the mixture in a bowl. 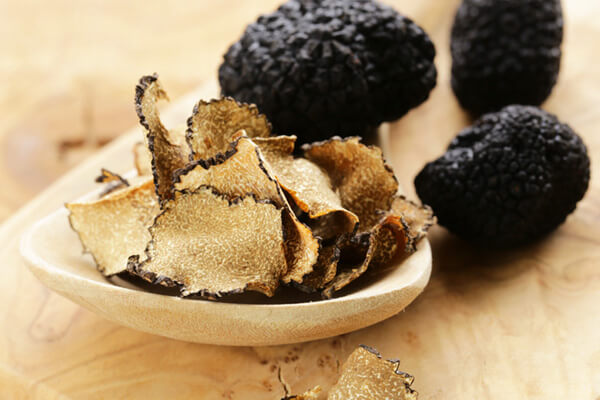 Tap each of the clams on a cutting board to see if they contain any grains of sand then rinse them well under cold running water.

Fill a pot with six liters of water and bring to a boil. Once the water begins to boil add 78gr. coarse sea salt.

In a pan, add 50ml extra virgin olive oil and the red pepper flakes. When heated add the clams. After about 30 seconds add the white wine and let evaporate. Cover the pan with a cover and leave cook until all of the clams have opened. 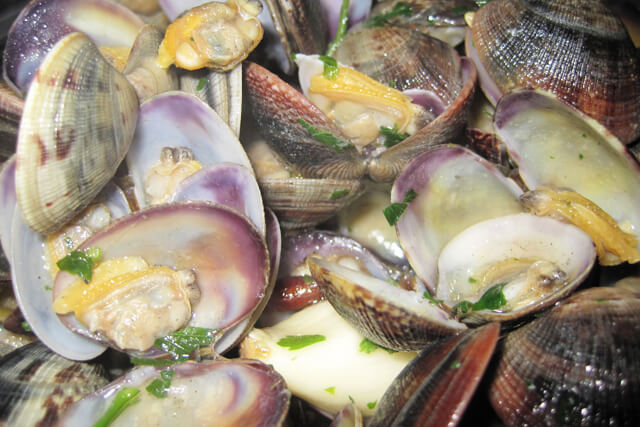 Tagliatelle with clams and truffles

Sol&Agrifood 2023 Welcomes the World of Cider