Tucked away on the rocky promontory of Italy’s Argentario coast, perched between sea and sky, lies Hotel Il Pellicano, a refined resort named best Italian hotel by Condé Nast Traveller USA’s Readers’ Choice Awards. This exclusive get-away, with its glamorous heritage, is located on the Tuscan coast in an area known as the Maremma surrounded by tranquility and nestled in the privacy of Mediterranean vegetation which gives way to stunning views of the sea.

The romantic story of how this iconic location got its start adds to the feeling of dolce vite which greets guests from the moment they arrive. The hotel is in reality the creation of a love story between American socialite Patsy Daszel and British Aviator Michael Graham. The aviator had caught Daszel’s attention in the 1950s after surviving a plane crash and the couple later met and fell in love on the promontory of Pelican Point in California. Both adored the Tuscan shores and so they decided to buy a piece of property and build there. 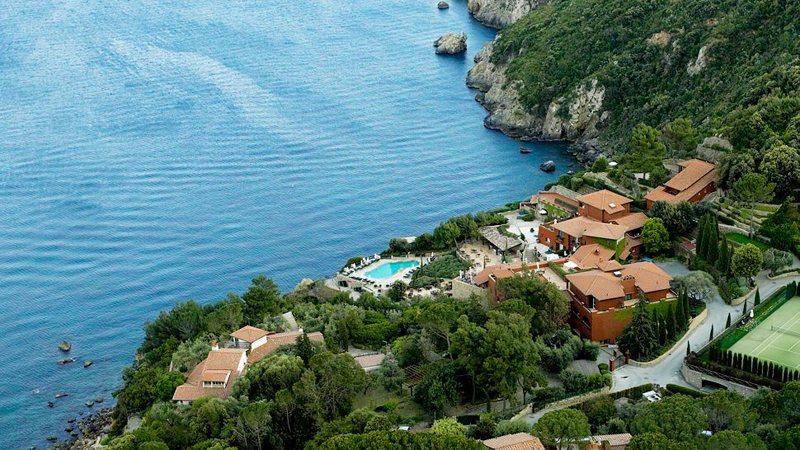 Over the years the location became the destination of prominent guests such as Charlie Chaplin, Henry Fonda, Gianni Agnelli and Slim Aarons along with members of Europe’s royal families and several politicians. One of the Graham’s more frequent visitors was the Italian entrepreneur and businessman Roberto Sciò, who eventually bought the property in 1979. It was his foresight and ability to maintain the glamorous atmosphere of the private residence which it once was that has brought acclaim to the hotel as one of the top in the world. 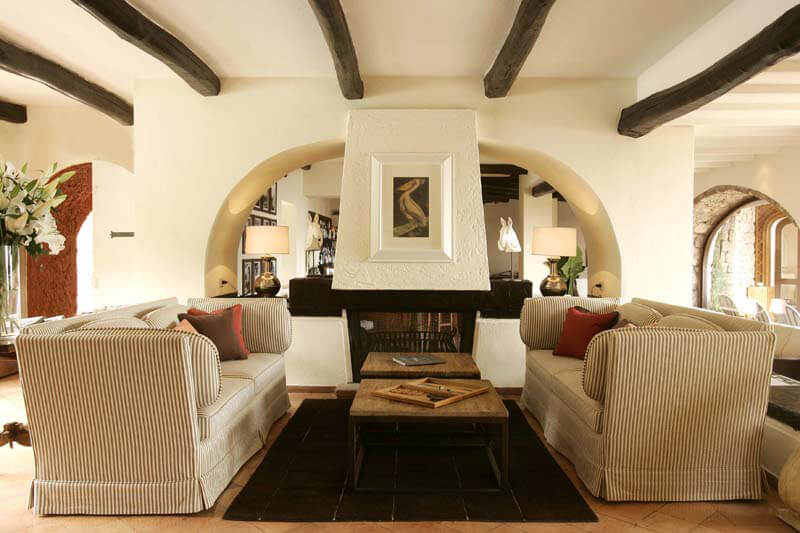 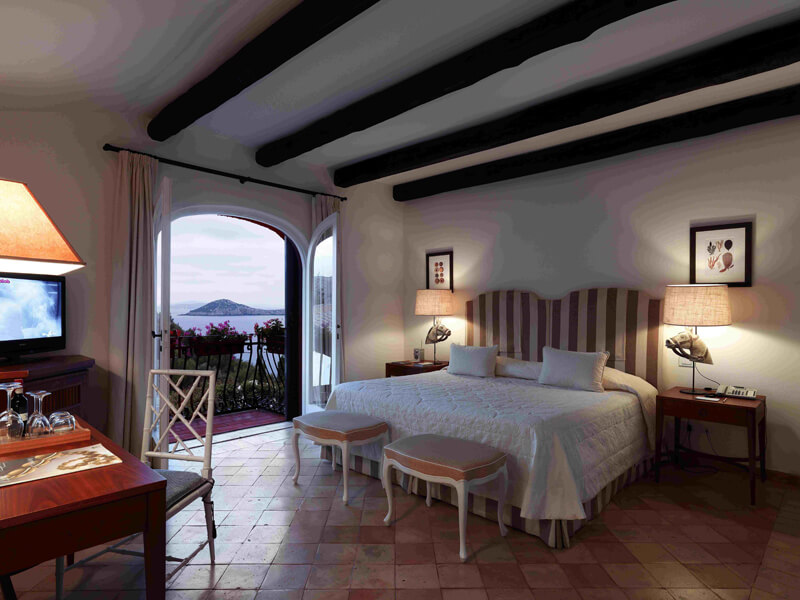 Today the Hotel Pellicano is spread out over its pituresque perch with six cottages and a central building with double rooms, junior suites, deluxe suites, master suites and a master deluxe suite with its own private pool. Rooms and cottages possess a refined Tuscan chic with exposed wood beams and terracotta floors. The grounds are filled with secluded gardens surrounded by cypress and olive trees mixing with pops of bright color from the oleander and bougainville and there’s a sent of rosemary and lavander on the breeze. Terraces offer incredible sunset views out to the sea and its archipelago. Besides its peace and beauty, the hotel also has a bar with top-notch cocktails, a meeting room, a spa for pampering, tennis courts, a private seafront terrace beach, restaurants and its own private wine cellar. 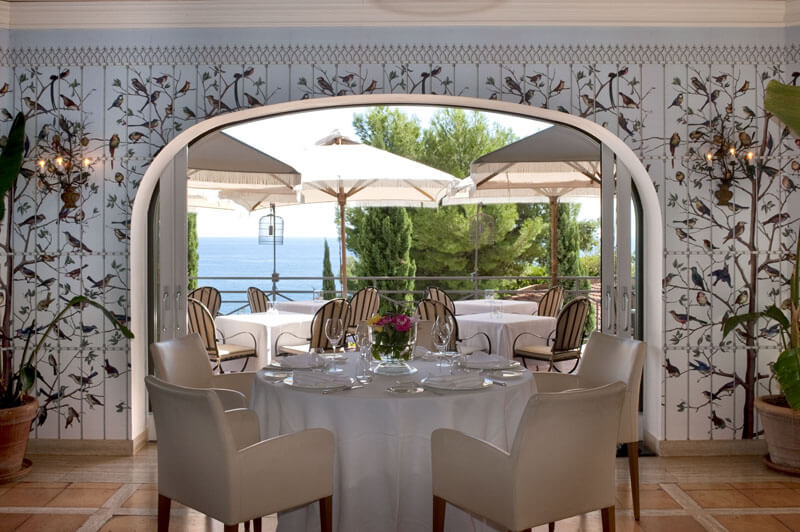 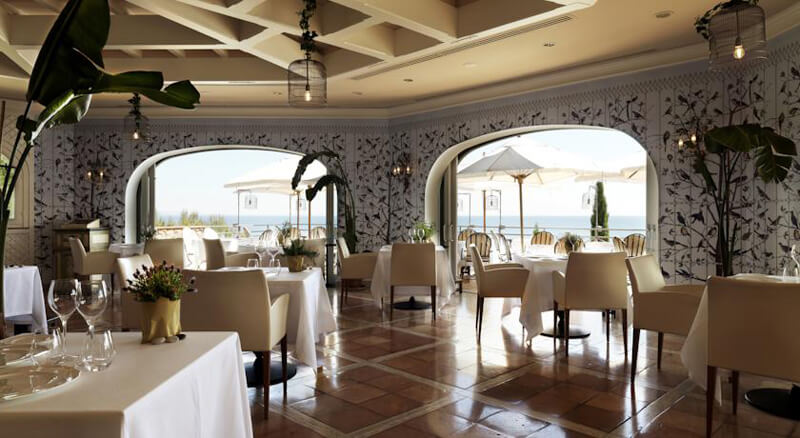 The hotel’s elegant and stylish restaurant risotorante Il Pellicano has earned one Michelin star and received the highest rating of three forks from Italian food and wine magazine Gambero Rosso. It is headed up by the young chef Sebastiano Lombardi who creates a gourmet menu which is constantly changing based on seasonal produce and the local daily catch. His dishes strike the perfect balance between innovation and traditional cuisine. All ingredients are carefully selected from local producers. 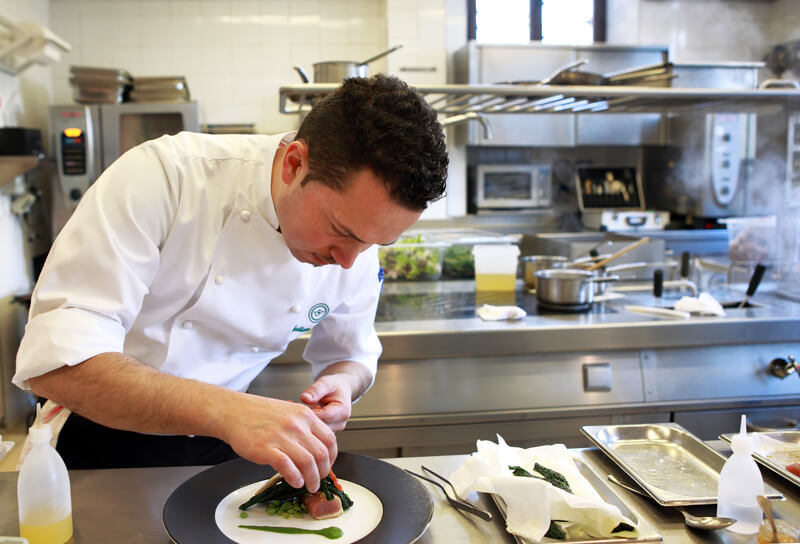 Here one of the many gastronomic highlights comes at dessert with an entire cart of Tuscan chocolates perfect for chocolate lovers and those with a sweet tooth. The hotel also has its own wine cellar which holds over 800 labels amongst which are some of the most sought after Italian wines and some the the best international crus several of which are available for purchase. Guests can also enjoy top spirits and a selection of excellent cigars.

A Culture Club of Good Taste at Il Circolino in Monza